Yesterday, the Newser had a little fun with it's "April Fool's" article. We got a few groans, and a number of chuckles. But we weren't the only ones pulling peoples' legs. 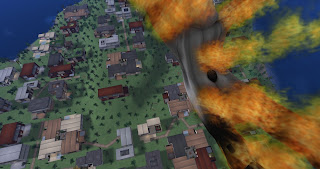 Linden Lab decided to get into the act. Unlike two years ago, it didn't involve calling readers for a special announcement only to just play "Never Gonna Give You Up." Instead, in a take off of Allstate Insurance's "Mayhem" commercials, a character called "Pandemonium" calls on the residents to upgrade to Premium account status to get comet insurance, referring to the update for Linden Realms that it's plotline attributed to a comet knocked off course to plummet to Earth.

In gaming, World of Tanks claimed they were selling the monster tank from their Halloween 2017 game, The Leviathan, as part of a special package with ten other tanks and 6666 gold currency, for $5000 US dollars. World of Warships had a "What cruiser matches your personality" test. But unlike in some previous years, no special games. Elder Scrolls Online did have a special in-game event, the Jester's Festival.

Elsewhere on the Internet, Google announced they had come with a "Bad Joke Detector." T-Mobile announced their "Smartshoephone." And no doubt there were a few yours truly has yet to hear.

What are your April Fool's stories? Know another gaming or Internet one the Newser missed?