Linden Lab posted yesterday about the upcoming SL15B, and it's "Crystal Anniversary" theme. They also had an infographic showing off some statistics about Second Life.

The SL15B "crystal" theme this year aims to inspire our Residents to reflect on the past 15 years and peek into the future to explore the next 15 years of Second Life. To kick things off, we've rounded up some interesting statistics and facts about the past and present state of Second Life in this new infographic ... 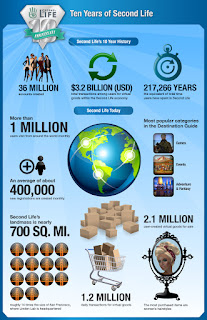 The last time Linden Lab had an infographic was the one for the SL10B five years ago. Both mention the number of accounts, 36 million then compared to 57 million now (obviously only a small part which are active). Both also mention the number of new account registrations per month, 400,000 per month five years ago compared to 350,000 today, a loss of one eighth. A total of over 217,000 years spent inworld by all avatars combined in 2013 compared to a combined total of 482,000 years today. 2.1 million virtual goods were available for sale five years ago compared to five million today, more than double back then. The top three destination categories in the Linden's Destination Guide have changed a little. Five years ago it was Games, Events, and Adventure and Fantasy. Today, the top three are Games, Editor's Picks, and Photography Spots.

They would post about more, which we will write about later.