Reader Submitted: My Banning From Faery Crossing, And Beyond 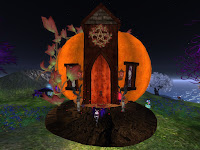 When people think of someone being banned from a sim, they usually think of a troublemaker. But what if the person had made numerous attempts to reconcile differences? In a reader submission sent to the Newser, MajikVixen (Bluevioletvixen Lorefield) describes her situation with the Faerie Crossing community, of which despite her efforts to smooth out differences she ended up banned from the area. Here, MajikVixen presents her side of the story. But the most important thing, she feels, is that there can be a life after banning for a resident of Second Life.

Read MajikVixen's story in Extra.
Posted by Bixyl Shuftan at 6:04 AM