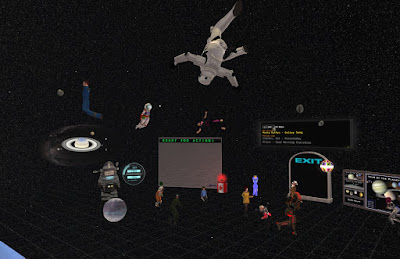 Thursday evening on April 12 was "Yuri's Night," an international celebration of the anniversary of the first manned mission in space. Although at the time it was seen as a defeat for the American space program as the United States was engaged in the Cold War with the Soviet Union, in years since it has been come to seen as a triumph for all of humanity.

For the event's first two hours, the party took place high above the Spaceport Bravo sim. Then at 4PM SL time, the people headed to the Sagan Planetarium at Aspen (200/120/3730). There, people danced, sometimes going weightless. Next to them, the planetary displayed to show each of the planets and the dwarf planets Ceres and Pluto. It was a fun time for space nuts.