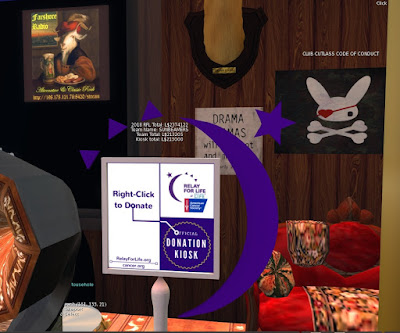 The Sunbeamer Team didn't have any opening events during the Relay Kickoff. But since the close of the last season, the team has been putting a few Lindens aside every month. And when the kiosk was placed, over 200,000 Lindens were placed in it. As of the writing of this brief, the total was 213,205 Linden dollars.

So what's our secret weapon? Well, if we told you, it wouldn't be a secret. But we'll unleash it when we're ready. Stay tuned for details.