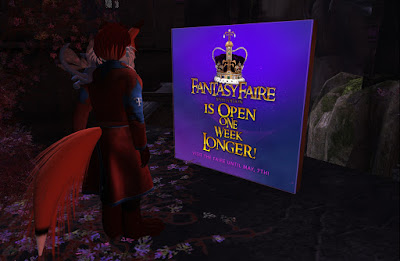 Officially, The Fantasy Faire ended last night. Fortunately, the sims will still be up for another week. So if you couldn't make it over, or if the lag was just too much, you have several more days to see the sims and shop around. The quest has been extended as well. So if you need a few more days to solve the House of Garland Quest, you're getting them.

Maybe you have heard the rumor that in an attempt to bribe their way out of Jail, the Lindens promised us some extra days for the Faire. Absolutely TRUE! I confirmed with the Lindens earlier today (April 27) that the Fairelands will remain open to us until May 7!

So have more fun at the Faire, though don't forget about the Relaystock that will be taking place this weekend, or other Relay events such as tonight's "Rave for Relay" by Team Sunbeamers.