When Sansar was finally released several months ago. it initially got a number of curious lookers. But most were disappointed, and stopped coming. It still has a few advocates such as Draxtor Despress, and as his Hoverderby video earlier this month shows there's still groups of people who have fun there. But how many use the place on a regular basis? It turns out the number is surprisingly small. A recent article by Hamlet Au stated data provided by Sansar user Gindipple shows the next-generation virtual world's concurrency numbers averages just ten to fifty users a day!

"It's pretty obvious there isn't much growth right now," Hamlet quoted Gindipple, though the Sansar user remained optimiastic "I wouldn't be here if I didn't think it was set to win the game. So it's got a ways to go yet. They've been a bit slow on development, but there is some recent indications that they are starting to focus some on what I feel is important, allowing us programmers to create rich interactive scenes." 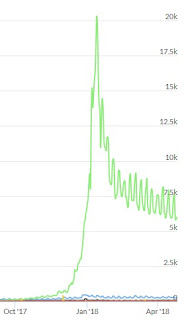 So why aren't people using Sansar? It's no big secret that Linden Lab has been looking beyond it's existing virtual world for users, "casting a wide net." But as the numbers show, it's failed to get more than a tiny number. So are practically all virtual world users in Second Life? Perhaps not as statistics about VR Chat show even after going down from a high of 20,000 users during the "Ugandan Knuckles" meme, this other next-generation virtual world still gets several thousand users a day.

Still, even the successful VR Chat is behind Second Life which after fifteen years still has tens of thousands of people online at any given time. With only one Sansar user for about every several hundred Second Life users, it's clear where Linden Lab's future, at least for the next decade, lies.