Scenes From the Fantasy Faire 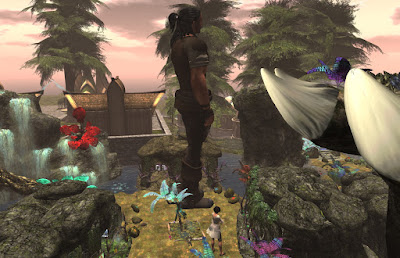 The Fantasy Faire got off to a good start in it's first few days. Besides the many great sims to explore, some of the people took the time to wear some interesting avatars. Among them, the Colossus avatars that have been available since 2012, but I've seldom seen them except during Fantasy Fair events. There are two in this picture. The smaller one, the lady in the white dress, was several times my height. But the male was well over a hundred feet high, maybe two hundred. I was a small speck near his shoe. 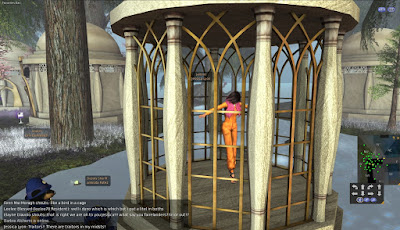 There were also some "Jail and Bail" events. The one getting attention was when Jessica Lyon, the head of Team Firestorm, was detained by the Farelands "Pawlice." Jessica was given a number of charges from deliberately slowing down debugging of the Firestorm viewer to taking Oldesoul's parking spot to squirrel porn. This was despite counter-accusations from someone in the audience that the Linden viewer team had bribed the Pawlice with waffles. Residents were invited to put money in two kiosks, one to bail her out, the other to keep her in longer. After over a couple hours, the bail side won 75,000 to 58404."Thank you Jessica  for helping all of  us Battling Cancer!" 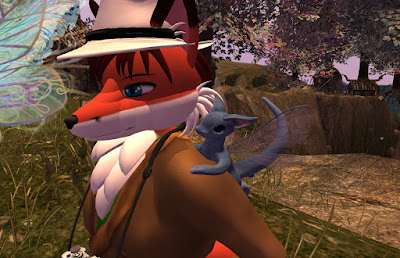 And yours truly gave the Fairelands Quest a try. In the quest, you answer a dragonfae's plea for help to search for the Queen's father. As you progress, you get small prizes. The game is HUD-based, and with the lag there were times I had to replay a video in my browser, or detatch and reattatch the HUD. Despite the bugs resulting from the lag, I found it to be a fun game. Already, there has been at least one whom claimed to have finished.