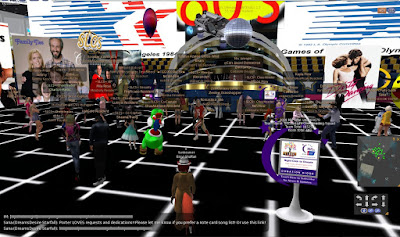 Sunday April 8 featured the initial events of two Relay for Life teams. The Second Life Cheerleader Squad had theirs at their Cheertopia sim. 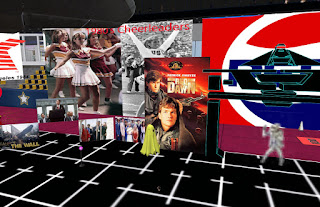 Come see Krisie Snowdrop with the Radical SLCS Cheerleaders throw a 1980s party to benefit Relay for Life of Second Life!  Pull out your parachute pants and get the big hair out because the 1980s have returned in full force. There are singers performing music all day.  If you miss this event it will be worse than Bill and Ted's Bogus adventure!Krisie  is truly honored to have the opportunity to sing for each of you  who listen to a song or show and hang out with her and her friends and fans.

Dropping in, I was greeted by a scruffy-looking Pac-Man going about the floor, with a few ghosts about. Looking around, there were a number of pop-culture items from the 1980s from a Delorian from "Back to the Future," to a "Tron" Recognizer, to posters of movies such as "Dirty Dancing" and Red Dawn," and more. There was one "Mario" avatar in the audience. ' 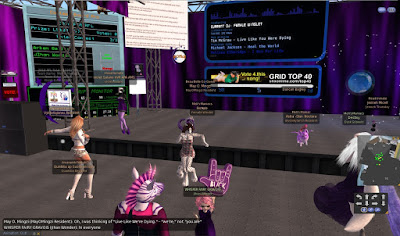 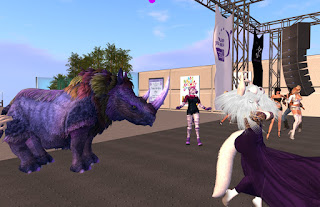 Also that day, Meli's Maniacs had their first event. It took place in Club Amartnth high above the Amarantha sim.

Yep, those crazy maniacs are back. Drop everything Come as You Are (as long as you are dressed that is) to Club Amaranth for music and fun with DJ Female Winslet and host (and co-captain) Violet Solano. We've got a 400L contest board, no club group needed to join. We've got a goal of 1500L for this event, so help us get there!

Female Winslet was the DJ for the event, that had raised about 500L by the time I left. There were a variety of avatars there from petite to small dragon to a woolly rhino. There was a 400 Linden prize in a "Come As You Are" event, of which ComCat Fenstalker took the biggest share. It was announced Female would be DJing for Relay events here every other Sunday.

There were also a number of events at RFL Kickoff 1 and 2, which were having their second day of events with the season's opening ceremony taking place on the first. Some other teams would also have their first event.

It was an exciting second day for the Relay.

Correction: It was originally reported that Female would be DJing every other Thursday. That turned out to be an error.
Posted by Bixyl Shuftan at 6:02 AM