The Instituto Espanol (58, 160, 25) celebrated the Mexican festival of Dia de los Muertos this week. In Mexico the celebration is held on November 1 and 2. It is a celebration of life and a way to honor deceased family members. At the Instituto, Cultural Director Malu Zhao has created a traditional altar that both celebrates and educates. Her exhibit includes a notecard that explains the significance of the items on the altar and gives directions on how to prepare one. 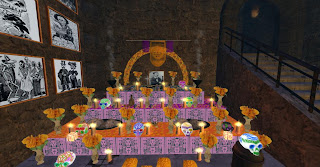 In her altar, Zhao placed photographs and the traditional items that are used to celebrate in Mexico. She placed a glass of water on the altar because water is a source of life and represents purity. She added candles to represent light, faith and hope. Her notecard explained that four or more candles are sometimes placed together to form a cross. Brightly colored marigolds are frequently used in the Dia de los Muertos altars, and they represent the impermanence of life. Seasonal fruits and special bread called “pan de muertos” are usually placed on the altar, too. Traditionally, Mexicans place tamales, mole and hot chocolate on the altar, as well as other food that the deceased person enjoyed. The food is a feast for the dead to enjoy. It is also customary to burn copal incense, which clears the space of any negative energy or bad spirits, and helps the dead find their way. 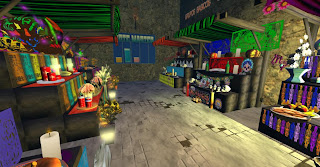 Students at the Institute competed in an altar building contest, and friends and visitors were encouraged to vote for their favorite. At the time this article was written, the Intermediate class had a healthy lead. The students placed their SL items, such as food, flowers, and candles on their altars.

To view the altars, follow the path lit by candles and strewn with marigold petals. It will lead you to a building decorated with colorful skulls. Go down the steps to the lowest level, where you will find the altars.