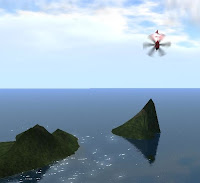 Today the family of SLVT Pilot Rhea Thor can rest easy thanks to a rescue operation conducted this morning. Rhea, a Swiss pilot, on loan from the Flying Tigers, was on a secret mission over the Dream Seekers Estates sim when her aircraft suddenly lost power. Fortunately Rhea was not injured when she was forced to conduct a low altitude ejection from her crippled plane. SLVT personnel responded immediately when word reached their headquaters. Wellhung (James) Bagley and Xabriana Porthos were hand picked to conduct a covert rescue mission behind enemy lines. Rhea, having already been on the ground for almost 24 hours, was located using the ultra secret SL mini-map satellite network. Agents Bagley and Porthos conducted a daring and challenging early morning HALO (high altitude low opening) jump from a SLVT Coast Guard C-130. Within hours of the jump, a SLVT Bell UH-60 extracted the two Agents and the downed Pilot.

Celebrations honoring the Agents and Pilot will be conducted during the Marine Birthday Ball on November 10. A buffet lunch will occur during the ceremonies.