Earlier this month was three years since I took on the job of reporter in Second Life. For me, it was a happy time, with a long “newbie” period behind me and having a couple hangouts and a good group of friends. Looking up websites about Second Life to learn more, I came across Second Life Newspaper, and it’s call for reader submissions. And after sending over a few, its owner and editor, JamesT Juno and Dana Vanmoer, invited me to join them. 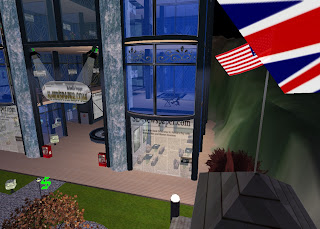 It’s been an interesting time, of good moments, and not so good. For me, it was my first job in Second Life, and at doing something I loved: writing. I made a number of friends there, and we had a lot of fun with the workplace parties, and my work getting an audience. I proudly wore the title of “reporter,” considering it an honor here. Although a few people looked at me suspiciously, more than one being mindful of the Grid’s tabloid “The Herald,” most were happy to have me around. And when Dana made me the office manager of Second Life, technically third in charge behind her and James, I felt proud, and happy.

For a long time Second Life Newspaper thrived. We made a deal with a noted land baron, moved to a roomy location, and had a couple classy offices, the second one there quite large. But the land baron went bankrupt, and the owner and manager had to deal with some real life-trouble. Dana’s skill kept the paper afloat, and making a profit for a while longer, but real-life pressures were just to much, and she had to leave.

And so, my perspective changed, from reporter to owner and editor. Not just writing stories, but having the responsibility for owning and running a paper, paying staff, cutting deals and negotiating. While I had done some negotiations before with advertorials under SLN, there was more of that at SL Newser. But with the much-needed help of my staff, and people willing to sponsor and otherwise help out, I persisted. December will mark six months of us under a new name, and as long as my friends keep writing (believe me, without them the paper wouldn't be around) and real-life allows I’ll be continuing to run it and write as long as there’s a grid under my avatar’s virtual fox feet.

Second Life has also changed. When I started, it was still relatively new and shiny in the eyes of the media, articles appearing regularly on the BBC news website and elsewhere. It was even on some broadcast television shows, such as CSI. And it’s population grew steadily. We didn’t have the numbers of “World of Warcraft,” but there was a good deal of optimism, and Philip and Linden Labs, despite their blunders, still had their dreams of a world of possibilities for residents, “Our World, Your Rules,” and plans for the Grid being an ideal place for business meetings and education.

Today, Second Life has demonstrated time and time again it’s possibilities. But seldom does it make headline news any more, usually an occasional mention in computer journals. The Lindens seem to be putting more distance between themselves and the residents, a number of popular ones gone and Philip himself departing (twice) to other pastures. Their plans for Second Life being a place for business meetings has been shelved, and as a place for education put on the back burner. “Our World, Your Rules” is no longer the slogan, but a reminder of simpler times.

But Second Life’s epitaph has been written time and time before. And despite the setbacks it continues to go on, even prosper. Not because of the Lindens, but the residents whom have demonstrated time and time again how creative they can be.

And it’s my pleasure to keep on spreading the word about it, now not just my own accounts, but the reports of trusted friends.