Looking Back at Delinda Dyrssen

It’s hard to believe when a friend passes away, especially when she’s young. Delinda Dyrssen was one whom had done so much, and had promise to do much more. 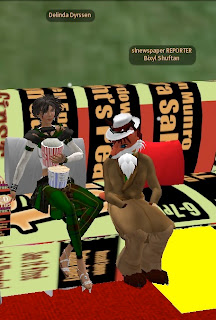 When I signed up with Second Life Newspaper in late 2007, Delinda (Denise WIlliams in real life) was one of the other freelance reporters. She did a variety of articles, notably ones related to music. As a freelancer, she could still work with other media. And she took a position as one of the staff at Paisley Beebe’s “Tonight Live” show. Over time in 2008, she became more involved with the show, as well as becoming part-owner of a music and dance club, “The Pocket,” and the articles we got from her few. But she and I remained friends. She was part of the reason I would drop by the set of “Tonight Live” time to time.

In 2009, with Paisley’s help, she began hosting a show of her own: Live ‘n Kickin, what Paisley called Delinda’s “baby.” Having a love of music, the show allowed her to put new talent in the spotlight. “I want ... the artists we showcase to get to as many avatars as possible,” Delinda explained, “to sell their albums, and to get booked for gigs, both real-life and Second Life, and to get offers and good deals from being exposed on our show. I hope that happens. They deserve it.” Live n Kickn would play for over a year, showcasing many artists and locations, until the show was finally canceled in October 2010.

Delinda ended up on dialysis in May 2009. her kidneys failing. Months later, she was able to get a transplant through a donor exchange program. She considered herself lucky, as those under dialysis develop complications as time passes, her doctor explaining, “of the 450 or so renal patient load he carries about about 70 of them die each year after an average of 6 to 10 years on dialysis.” After her recovery, she decided to take “a little trip (of a lifetime,” going around the world. Besides sightseeing and running into a few of her online friends, “I needed to take advantage of an opportunity to do some good in the world. ... Yes I know, I am just as important as a grain of sand on a beach, But I also know that just one person can make a difference, and even if I fail, at least I will know that I tried.”

She continued to go online between flights and sightseeing, updating her blogs, helping out with Treet.TV and the Pocket, and keeping in touch with friends. In one post, she described one experience in Tunisia in which the doctors were uninterested in new treatments for kidney disease, appearing to prefer their dialysis patients remain sick. Her last entries were on November 13, her Twitter stating she was “feeling a tiny bit under the weather.” I didn’t think much, until when I heard on Saturday November 20th that she had fallen into a coma. Before lapsing, she had thought she would be only be in the hospital briefly, and asked friends not to worry. Still, her friends at the Pocket gathered, and arranged for music to be played in her hospital room the night of the 19th. It was told that she was close to being awake and tears came to her eyes. So everyone was hopeful, including the doctors.

But to everyone’s shock, her heart gave out and she died. She was 32 years old.

As word got around, people gathered at The Pocket, talking about her and what she had done. Musicians, media personalities, and regular fans, we were all united in remembering our now departed friend, whom had given so much of herself so others could shine. Chesnut Rau created an SL group, Delinda Dyrssen Memorial, for updates ,"This group is to organize a memorial concert to benefit her favorite charity and to honor her endless enthusiasm." Her family has stated they will post information on real-life services on the old DWkidneyupdate blog.

Let the musicians she has helped throughout her time in Second Life be her memorial.

"It does not do to dwell on dreams and forget to live, remember that." -- Albus Dumbledore, Harry Potter and the Philosopher's Stone (tweeted by Delinda Dyrssen on Oct 29).