Eye on the Blog: the SL Web Viewer Beta

After being talked about for some time, Kim Linden announced Linden Labs had made a limited release of their web-based viewer.

Yesterday, we quietly launched a beta test of a new technology that opens up Second Life to new users like never before: Second Life on the Web! The SL Web Viewer allows new users to become Second Life “guests” through the Web and enjoy basic SL functionality while exploring exciting destinations in Second Life -- all without downloading a Viewer.

Linden Labs is asking residents to test their viewer. However, not everyone who tries will get the chance. Residents are asked to click on http://interest.secondlife.com/beta , where they sit through a video lasting a bit less than a minutes, and then are given either an “Explore Now” button, which means they can proceed, or a “Join now” button, which means they can’t. I myself tried several times with no luck. Those who are successful can create a temporary guest account to use the viewer.

Wallace Linden stated, “The test won't be available to everyone, based on a number of variables, including bandwidth, system setup details, and other factors. I don't think cookies or repeated logins will make a difference. I don't have more information that that at the moment, though.” 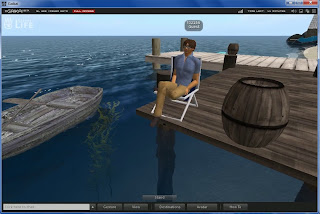 In the comments below, most residents, at least those who could get in, were pleased with the viewer. Inksky Jedburg has one of the more detailed comments, “The first thing I noted was how very simplified the viewer was, obviously not going to be a tool for builders and creators, but rather a tool for socializing (on a limited scale compared to the SL viewer), and exploring. I could not go into mouselook to look up and down from my POV, though camera controls were available as was ‘camming.’ The beta only allows you to go to a select few locations, less than 100 I believe, and I understand having it that way for the beta. Though textures were gray for a while, what struck me was how smooth movement was. As I thought of first time user experience, the dumbed down controls like sound on/off, pick from a palette of locations to visit, and a palette of available avatars, and a very basic help window describing around a dozen available functions, seemed to be very complimentary controls for someone visiting for the first time, or even coming in on business for the first time. Simple and stupid, and yet showing SL as it mostly is seen on the viewer (minus windlight!). “

Inksky was “favorably impressed” with the viewer, “I think it has potential to be much better, and I believe it could be a major win if developed with greater care than LL has given past developments. So please, proceed with caution LL and use some common sense to make this extremely useful development pay off.”

New World Notes also has an article on the Web Viewer Beta, which included a review by Alicia Chenaux, and a video from Metaverse TV.

Vryl Valkyrie also has a few pictures of her experiences of the Web Viewer in her Flicker account.
Posted by Bixyl Shuftan at 5:59 AM