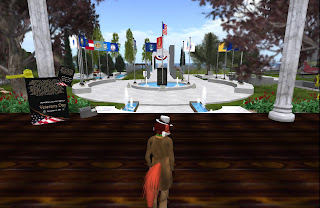 At 6 PM Sunday, the Second Life Veterans' Tribute officially opened, with an opening ceremony featuring TerryLynn Melody singing The Star-Spangled Banner. Since then, a number of DJs and live singers have offered music events, such as Phemie Alcott and David Csiszer on Monday.

The purpose of the Tribute, in addition to raising awareness for Veterans, is to raise Lindens for Operation Uplink (http://www.operationuplink.org/) which donates pre-paid phone cards for veterans serving overseas. The goal is 500,000 Lindens.

Various volunteers are at the Tribute, to answer any questions visitors have. Sometimes they are in uniform, such as a Civil War uniform worn by Jurassic Moonites.

The Tribute region has much to see. The center of the sim has a memorial wall, each brick having the name of a veteran, alive or deceased. Visitors can offer the names of veterans they know. The names from last year's wall are still there. Among those contributing names was Jamar Dexler, Revolutionary War fireship captain Thomas Perkins, "He's my 5th great grandfather on my mother's side of the family. He was ... on the John Hancock, then a Leutenant on the George Washington, and finally Captain of the Hecla. I have all the birth and death certificates that link me to him but I haven't joined the Son's of the American Revolution....yet!" 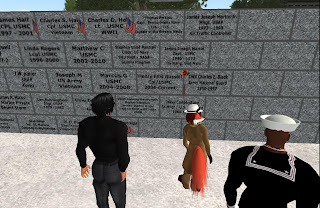 Jamar pointed to the brick left of Cpt. Perkins, "My good friend Steve Marshall is to the left. We had his funeral on Saturday." Marshal was with the Gemini Program, "he was an astronaut. He didn't go into space but he flew Navy jets. Many people don't realize there are many more astronauts than those we saw on television. I worked with him at a part time job and heard many many stories. He was really good and writing and telling them."

There are other memorials in the sim, such as a recreation of the American Unknown Soldiers' tomb, a memorial to Australian and New Zealand veterans, and a monument to Argentinian soldiers who fell during the Falklands War. 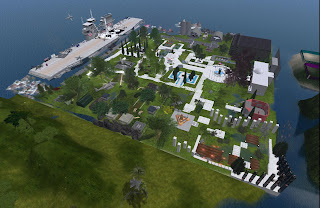 The sim offers a number of exhibits as well. "You have to hunt around to find the things," SLVT volunteer Wildroses Pevensey told. The southern part of the sim has many displays of Coast Guard ships and aircraft. The eastern edge of the sim has an aircraft carrier, the Wilder Carrier, along the length, which serves as a store, and a location for music events on the deck. Some of the planes, and even the carrier are up for auction. The winners will be chosen at 6 PM Friday. To the north are a few modern military exhibits, with helicopters and armored personnel carriers.

Wednesday will be a special day with a number of events. There will be an air show by the Flying Tigers group from 6 to 8 PM. At 7 PM will be a Coast Guard search & rescue demonstration. At 8 PM is the highlight, a Battle of Britain Tribute dogfight recreation, with three air groups participating, the Flying Tigers, RAF Biggin Hill Squadron, and the JG-2 "Richthofen" group.

SLVT volunteer Wellhung Bagley stated so far over 30 had offered to be singers, DJs, and other entertainers. At least 15 were involved in the air shows.

The Tribute will go on until Saturday, with the closing ceremonies at 6 PM.