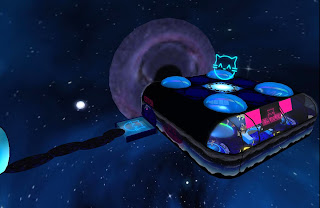 Club Fur has been owned for the past year by Alynna Vixen, “I always had the ability to make this club rock. I just don't have the ability to run it alone. ... We're kinda joining a conglomeration of clubs. ... Hopefully the new staff will do more with it.” Nydia responded, “Well, we are forming it.” 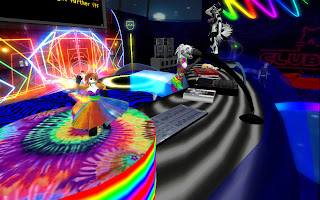 Alynna was told by the previous owners the club was built in 2004, which makes it one of the oldest clubs in Second Life regardless of genre. Club Fur’s wiki (started in 2005), states that it’s form “was partially inspired by the work of Frank Lloyd Wright,” at one time sitting over an ocean, much of the floor was made of glass plate so people could see under the water. The wiki describes an interesting history, supposedly at one point rescued from an old home "two minutes before they leveled the place." Before Alynna, it sat in Furnation Prime. She described it as not being used very much. When Furnation Prime closed, she was given the club, where it was moved to Kitsuhana, a sim of the Sunweaver Estates.

Located high above the ground, the club looks like it’s in the middle of space, a neon cat’s face on top slowly rotating. It’s glass wall gives a clear view into the interior from one side. Inside, the middle and back of the club is illuminated with neon lights and whirling beams of color. To the side of the club is a bar with the front end of a hot rod mounted on a wall. Near the front window are a few arcade machines, including Vectorzone, which can be played between parties. In two of the corners, people can sit around a table, where a dancer can perform if she likes, Alynna explaining, “the table dancers do not have to be in (the club) group to use the tip jars above them. The stage poles still require group membership.” 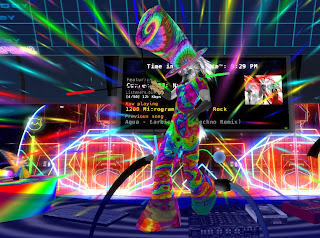 Late Saturday night, Nydia had a “pre-opening” party for a few friends of her and Alynna. The club had its first. On Sunday night was the “Rock Out” party, in which the club was officially open.