From Thursday to today Saturday, the Avination Grid has been having it’s first official Anniversary celebrations. Conducted mostly in a sim appropriately named Avn1B, there were live concerts to attend, as well as a few freebies to pick up and a few amsements, such as an amusement park ride and a maze sim. There was also a raffle in one building on the northeast, the prize being getting an Avination sim rent-free for a year. 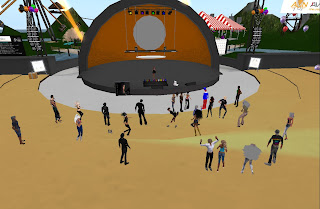 Dropping by on Friday afternoon, a Carah Nitely was singing. While the crowd at 26 residents would be considered great for a typical party in Second Life, it seemed small considering the magnitude of the event. Among the crowd were some of Avination’s “A-Team,” the equivalent of Second Life’s Lindens. Chatting with someone with customer relations, she admitted things were a bit smaller and simpler here, but the A-Team was far better at listening to the residents and dealing with problems.

Avination has had great success as well as challenges in it’s first year. It grew rapidly, then more recently began leveling off. There has also been a debate about Avination having a less strict gambling policy than Linden Labs, some saying it gives the residents more choice, others expressing worry about the gaming halls. It was partially because of their allowing gambling that Paypal and Avination almost parted ways but reconciled. There were also rumors floating around that Avination hired JCool/Fractured Crystal of Team Emerald to work on their viewer. Although the man in question was later booted from Avination for trying to access Second Life again after being banned, there has been no solid evidence to support the rumors.

For Saturday, from 10AM-2PM is the “Avination Networking Event “at the Avn1B region. From 3PM-5PM is the Avn1B Final Party with DJ Volkmar Taurog at Club Wastelands in the City Center region

For more information about the anniversary event, contact Micheleh Center at helen@avination.com.

*Addition* The winner of the free sim for a year was Isis Ophelia. Also, the A-Team later published a youtube of their event.