After the Storm at Podex 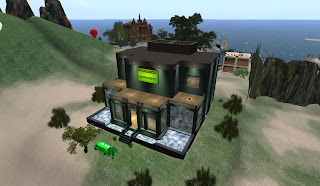 It was a late summer day at the Podex exchange. As usual, the tellers were doing business with customers, and chatting among themselves about events. Some talked about inworld happenings, such as the Isle of Wyrms festival and the Zindra Expo. Others talked about events in reality, such as the once in a century earthquake in the eastern United States, and Hurricaine Irene, which smashed into the East Coast. Some tellers remarked they had yet to see certain friends log inworld, “I hope they’re okay.” 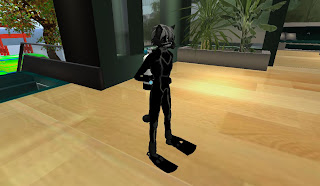 About this time, one particular avatar walked in. He was dressed oddly, in skin-diving gear. His flippers smacked the floor as he made his way to the teller, who addressed him, “Um, can I help you.”

“Yes please. In real-life, I live in one of the places hit by the hurricane, and power to the bank is still out. I need to sell a few Lindens for real cash.”

“Right away, Sir.” The teller asked him how many Lindens he wanted to exchange, “Our minumum is one thousand Lindens, and our maximum 50,000 Lindens a day.” The diver gave an ammount. The teller then asked, “And is this your first transaction? If so, there’s a 48 hour waiting period for security reasons.” “No, I’ve been here before. Just not when having to deal with a flooded home.” he glanced at his flippered feet. 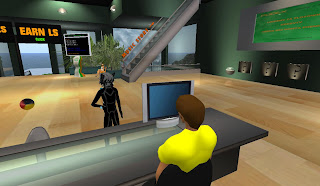 The teller punched some numbers, and after a minute, “All set, Sir. The Lindens have been exchanged for dollars on your account.”

“Thanks a bunch. I’ll have it up on my credit card in no time.”

“By the way, if I may ask, if your bank in real life is not yet operating, I assume the stores have yet to receive power. What do you plan to buy?”

“The hardware store nearby also sells wind-power windmills, and I need a new battery.” The avatar then flickered, “Oh squid. And my power just - “ the sentence was never finished as the avatar was cut off in mid-sentence, and moments away faded away into the cloud of particles of someone going offline.

The teller stared at where the avatar was, and after a few moments, went back to business.