How to Create a New Avatar With a Surname 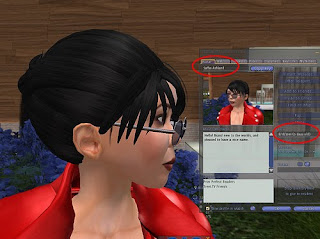 The “Prim Perfect” newsletter has a useful tip if you want to create a new account with a last name chosen from a list. One can through a third-party portal: the New Media Consortium portal. Saffia Widdershins, who wrote the article, credits the tip to Whirly Fizzle. She thought there were similar portals to the Grid where one could also get an account with a surname, but wasn’t aware of them yet. For now, “if I meet someone who wants to try out Second Life, I’m going to be pointing them here as their starting point.” The list of surnames she thought was a bit small, but still it was a choice.

Saffia (and presumably many others) feel the tip is a necessity because getting stuck with the generic last name of “Resident” is undesirable to many, “why is Linden Lab still insisting on something that a large number of existing residents hate, and which is causing misery and confusion for new residents – and landing them with something that may well prove a burden to them for much of their Second Lives?” Others, such as Ceejay Writer and Arwyn Quandry, have expressed similar opinions, feeling Linden Lab’s new naming system permanently labeled these accounts as noobs. Ceejay commented with older shopkeepers jittery of theft might be quick to conclude “Resident” avatars are copybotters and ban them for no other reason.

Bringing up her question, Hamlet Au commented, “Interestingly, I've talked to several Lindens past and present about the topic, and they don't like the new system either. But it may be too late to change, or too far done the priority list to change it any time soon.”

There is a JIRA requesting that Linden Labs at least make last names for new accounts an option again. As of this article, so far it has over 1200 votes.