A Gathering Of Friends 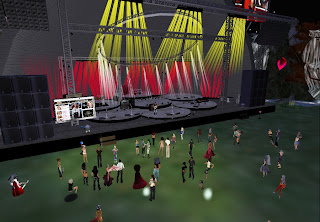 They called it "A Gathering of Friends at Bowery Beach" and it was dedicated to a woman who is known and respected by all. Her name is Beth Odets and if you follow her solo and streaming duets you know she's a talented violinist with a wonderful sense of humor.

On Monday, Aug. 22, Odets was admitted into the hospital to have brain surgery. Rock Doghouse and a sim full of devoted friends, and her brother, gathered to show their love and support. Updates were given throughout the night.

On an impressive stage, when I received my invite from Jackson Sharpshire, was Matthew Perreault, Odets real-life buddy and SL partner. The only way to describe what we were all experiencing was connected. Connected to the people who love her and connected to her to show our support. 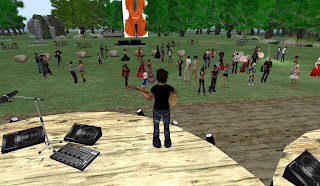 Musicians took turns performing. Up next were KevinMThomas Carpool and Edward Lowell. Following them were Bat Masters and Steely Decosta. The songs, as well as the many texted comments, were very touching.

The next morning, I learned from Sharpshire that Beth, Rock and other friends were skyping with Odets via phone shortly after she awoke.

*Editor's Note* I was able to drop in thanks to Netara, and it was quite an event. The grounds in front of the stage were truly packed. One line that stood out was Rock Doghouse saying, "Thanks everyone for being here for Beth... she knows everyone is here and says thank you and loves ya... she is going into surgery right now... drafty hospital gown and all (grin)."