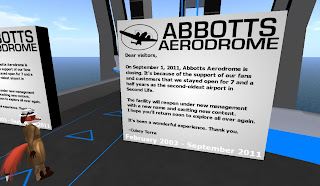 Recently, SL Newser heard about Abbots Aerodrome being saved from vanishing from the Grid. To begin with, Abbots is thought to be the second oldest airport in Second Life. It was founded in January 2004, and has gone through several reconstructions and expansions, spreading out, and upwards. The current aerodrome has four levels and takes up the majority of the sim.

Earlier this month, the owner Cubey Terra announced on the SL Universe forum that the place would be closing on September 1st. After seven and a half years, he was a “old and tired avatar” whom wanted to retire. The news was greeted with sadness on the forum and elsewhere. Even those with little interest in air activities didn’t like hearing about a place enjoyed by so many for so long coming down. 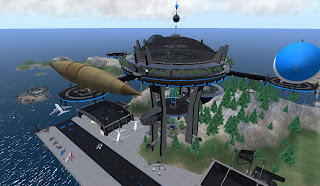 Fortunately, Cubey was willing to sell the place. And a few days ago a Cheshyr Pontchartrain announced he was making arrangements to buy the place, “The airport name and vendors will change, per Cubey’s request, but the airport will remain open to the public, and give new airplane makers a chance to spread their wings.”

Dropping by the place, it truly was a sight. On the ground level, I could see an automated airliner go down the runway and climb into the air. An elevator took me to the top floor where there was a small social area for anyone taking a rest, plus a shopping area that included transforming plane/robots and flying battlesuits, and even suit helmets for furry avatars. The top floor had four smaller platforms in each direction, two for skydiving, and two for blimps. There was a blimp for sale, but it was available for demo rides up in the sky where one could fly at a slow, leisurely pace. 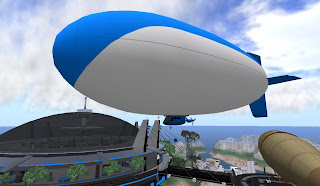 And that’s just one floor, obviously there’s much more, and a must-see for pilots and anyone else whom loves flying, parachuting, and other aireal activities. When Daniel Voyager did a “Top Ten Airports” in Second Life, Abbot’s Aerodrome was near the top.

One catch is that all names owned by Cubey Terra are to be removed from the airport, including “Abbots Aerodrome,” once the place changes hands. Cheshyr is still open to ideas for a new name, “I’m thinking something involving Costello’s. (grin)”

Daniel Voyager and New World Notes also have articles about Abbots Areodrome. One can find more information on the Second Life Wikia entry too. Cuby Terra's post on the potential closure showed the airport throughout the years.