Inside Anna's Many Murders 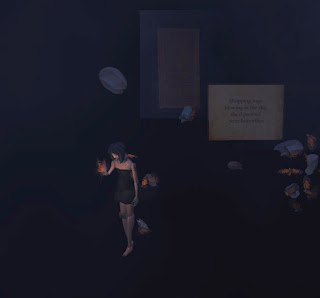 Viewing the machinima posted in this publication on 6 August, I found myself quite intrigued by it. I wondered what was behind it, the motivation or inspiration or, even...compulsion, if that were the case.

I contacted the creator of the machinima, Bryn Oh, whose responses to my questions were quite intriguing to say the least. Anna's Many Murders was born of a daydream when Toronto's subway lost power. All passengers had been lost in their own electronic worlds (blackberries, ipods, etc.), ignorning those around them. When the subway came to an abrupt halt, everything else stopped and the silence and stillness in the car was eerie (enter the Twilight Zone?).

The daydream was of a future where no one would carry additions to their bodies but instead have them surgically implanted. For example, a nose app would "smell fresh baked bread 3 blocks away" and an eye app would "set out a digital course...to find the bakery."

Hence, the victims in this machinima are largely metallic in shape and Anna symbolically appears more human. This is representative of the world in which Anna lives, a world where everyone has become almost inhuman because of the many apparati they carry.

Trapped in this dehumanized world, Anna is desperately lonely. She glosses over reality with her own imagination in order to function and be happy. In the process, she becomes quite mad and in her madness, she seeks to annihilate those mechanical beings which make up her world.

Anna's Many Murders is somewhat (and I use the term loosely) representative of today's society, the world in which we all live. Filled with digital "apps" that we can't seem to live without, we have lost touch with reality and the beauty of nature which surrounds us.

Unfortunately the patron who had supplied Bryn Oh with the sim to build Anna's Many Murders had come into hard times a few months ago when Anna's opened and Bryn could no longer afford to keep up the rent. The build has since come down but fortunately for us, she was able to make a machinima of her exhibit beforehand.

Shellie Sands
Posted by Bixyl Shuftan at 6:01 AM