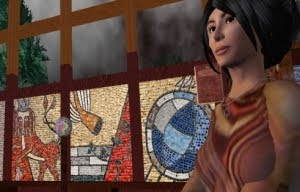 Last week, New World Notes reported that Beth Odets, “a longtime Second Life community leader, artist, and musician” was going through surgery to remove a brain tumor. In a couple days, $6,000 US Dollars had been raised. Since then, the money has continued to come in. Daniel Voyager recently posted that the total had passed nine thousand dollars.


Beth Odets, a longtime Second Life community leader, artist, and musician, is undergoing brain surgery to remove a tumor, and her friend Eshi Otawara, a famed fashion designer, has discounted some of her widely-admired designs to help cover the costs of the operation.


Someone commented one reason this fundraising hasn’t gotten more attention is because of Beth’s humility. During the "Jamm for Genes," she asked people to donate to the children’s charity, but spoke nothing about her own troubles.

Further donations can be made on the appropriately named “Beth’s Brain” website, which shows daily totals and a donor list.

*Addition* - As of Friday August 12, the combined total of donations raised in Second Life and Paypal was over $15,300 dollars.