Following a town meeting at Steelhead (more on that later), I met with a few of the locals, human and otherwise. One of the elvenfolk, a TotalLunar Eclipse, told me his partner Tensai Hilra planned to do a controlled explosion at the nearby Mt. St. Helens, in order to prevent or postpone a much larger eruption predicted at a later date. However, he suggested there might be alterior motivations, "I think people just want a boom." 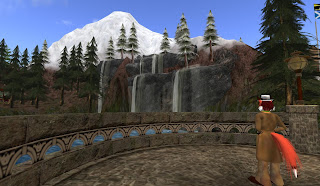 Tensai, who was nearby, seemed to grin manically, "Yesss... something must blow up." TotalLunar commented, "It is called the 'smoking mountain' for a reason." A Rockandroll Michigan who was nearby suggested that "bewm" was a "state hobby" of the area.

Checking St. Helens for myself, it was calm and peaceful for the time being. Birds were chirping. Horses happily grazed in a nearby pen. There was no hint of what was to come later.

The controlled explosion/eruption is scheduled for this Friday at 7PM, at Steelhead St Helens. The scientists (or madboys and madgirls, depending on who you ask) assure nothing will go wrong.

They mean it, really, stop laughing.