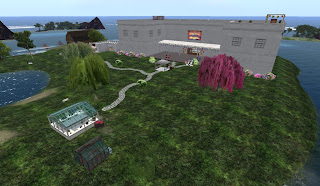 I first ran into Eve Quintessa a few years ago. A woman interested in photography and pictures, she set up a photo and graphics studio named “Graphics by Eve.” More recently, she has expanded her talents by getting into building. The store where to find her wares: Everlasting Kiss Furniture.

Once her business with the customer was done, Eve turned to me, saying business was good, “It's picking up. She bough some custom furniture. ... liked her custom sofa. ... She's a good customer - bought out almost the whole downstairs!” 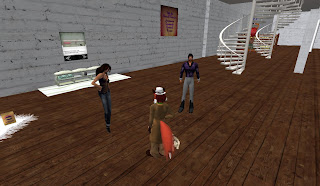 Eve’s partner dropped by, and she introduced me to him: Ramses Hansome. Ramses felt the items in the store would be of extra appeal to those “who enjoy beach living, people with beach homes. We have all the right furniture for them.” Eve added, “People who like casual living - but still want more than just beach chairs. A lot of people have commented on the textures we've used.”

Eve showed me around a little. In the southwest corner of the store’s ground floor was the bedroom department, with a number of beds and other furniture of for sale. But what most people would see first would be the “Shabby Chic” section in the middle part of the store, with well-built items that were both fairly low on both prims and price. Upstairs were some accessories. There was also a “coming soon” display of what set Eve would soon have for sale. 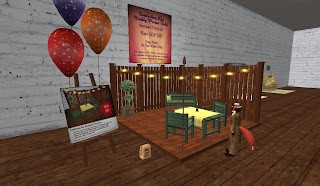 Near the front desk was a weekly promotional sale item at half off for a week, when I visited a “Backyard Party Set” with a deck patio, fencing, lights, deck chairs and table, a bench with couples poses, and a hurricane lamp & potted tree. The whole set was 149 L for the week. For those in the store group, with the cute tite “Addicted to Kissing” (try wearing that at certain clubs ;-) ), there are weekly gifts for members. One can pick them up either next to the front desk or on the front deck next to the sign.

Eve also offers plants and gardening items for sale. To the south of the store, down a path from the gazebo, is the greenhouse and garden center. For a few Lindens, one can get gardening tools, pots, and indivudual plants. You can also get herbal gardens or a while greenhouse for 200 Lindens.

To the west of the EK Furniture store is the Graphics by Eve Photography and Graphic Design Studio. Eve continues to run the studio, taking professionally done pictures. There are numerous displays of her work here, including a few partial nudes. Eve says one of her favorite subjects is Halloween, and plans on doing a number of shoots in October.

West of the studio and near the shore is the barn. Currently it is empty, but Eve plans to make good use of it in the future. For now, it serves as decoration for the area outside the store. Much of the sim has been set up not for shopping, but for a relaxed countrside look, with water lapping at the shoreline.

Eve Quintessa has a Flikr page up, with pictures of both her furniture plus examples of her studio shots. The store also has it’s own blog page, showing the latest goods for sale and the latest deals.

So for quality furniture, especially for the outdoors, and maybe a relaxing stroll in the fields once the shopping is over, stop by Eve Quintessa’s Everlasting Kiss Furniture store.