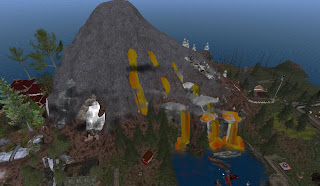 In the early evening of Friday August 12th in the Steelhead region, Mt St. Helens errupted. The eruption was deliberately planned, but was probably larger than intended, and earlier than the intended time of 7PM SL time. Pyrocastic flows of lava poured down the side and into a nearby lake. A number of trees were destroyed, but the only property damage appeared to be a tent set afire by embers that drifted over and a boat in the lake that had caught fire and halfway sank.

Far from panic, the residents began to gather at the lake to celebrate the “bewm.” Among the first were TotalLunar Eclipse, Tensai Hilra, and Fuzzball Ortega. Fuzzball was setting up a music player for a celebration. They appeared to be floating on the surface of the lake. Perhaps they were gathering where some debris made the water a few inches deep, or maybe it was some force field created by some local mad scientist.

They were soon joined by a huge red dragon, followed by what looked like a female demon. Instead of attacking, they just mingled, the demon dancing to the music. More residents began arriving, in addtion to another firey girl with flames flickering off her body plus some kind of creature resembling a small volcano with airplanes flying around it. and they joined in. No one seemed too upset by the volcano, perhaps trusting that the local scientists had it under control, or perhaps had been looking forward to a show of some kind, “We just love a good ... spectacle, don't we?” someone commented with a grin. A couple nekos were chewing on tiny Chinese firecrackers

And then there were the puns, “What did the flint say to the piece of steel? - ‘You look very striking tonight.’ “ “Let’s strike up a conversation.“ “Did someone make an ‘ash’ out of himself?” “The punsters are on fire tonight.”

As the volcano rumbled on, the lava flows for the moment staying away from the gathering, the residents of Steelhead, human, neko, elven, and otherwise continued to party, taking it in stride.