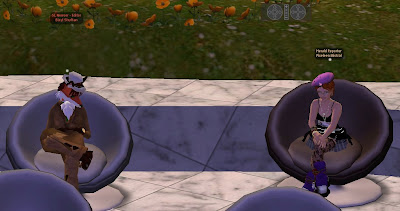 When I worked for Dana Vanmoer at Second Life Newspaper, "The Herald" were considered our arch-rivals ... sort of. They were a tabloid, feeding off the drama at the bottom of the Grid, and we were the paper with standards. We made an occasional playful jab at them, for the most part keeping our rivalry low key. The harshest words about them came not from us, but by some readers, saying they gave Second Life journalism a bad name. Eventually, SLN closed, Second Life Newser opened, and the "Herald" began to slow down in it's number of articles per week.

Fast-forward to a few weeks ago when I met their editor Pixeleen Mistral at the set of the political talk show "Virtual Speaking." I had seen her a couple times at Luskwood, but she was Away from Keyboard. This time she was chatting with someone about economic inequetties and how she felt they hurt the Grid. I wasn't sure what to expect, but she greeted me politely, and actually complemented our coverage of one particular subject.

So what does one do when your "arch rival" greets you with praise? I greeted her politely in turn, and when matters required me to depart, I wished her well.