Opinion: Will SOPA Wash Away the Internet (and Second Life)?

A youtube of a chubby bearded character has been going around a number of friends of mine. Despite his similar looks to left of center figure Michael Moore, this man’s cause is more Libertarian: the SOPA Bill in Congress.

The SOPA Bill in Congress, he charges, threatens to shut down the Internet as well know it by making people liable to a multimillion dollar lawsuit just for *linking* to a song or other material. Ironically enough, some of the top SOPA supporters he charges were distributors of some of the software tools used by downloaders, CBS/VIACOM, ABC/Disney, Microsoft, and others. The purpose: entrapment. He charges the distributors of conspiring to put a chokehold on the Internet in order to control entertainment markets by “taking down Youtube, Twitter, and all other websites and networks you use.”

He certainly sounds over the top and easy to dismiss. That he was previously noted only for his “Epic Fail Toys Funny Videos” doesn’t exactly help his cause. But the more I looked into SOPA, the less I liked.

SOPA is short for “Stop Online Piracy Act.” Checking Wikipedia, the bill would allow copyright holders to sue websites they accuse of “enabling or facilitating copyright infringement.” Actions they could take include Payment sites like Paypal from doing business with targeted websites, baring search engines from linking to them, and requiring Internet Service Providers to take them down. It also would make “unauthorized streaming of copyrighted content a crime” punishable by five years in prison. Debate in the House will continue when Congress returns from winter recess. 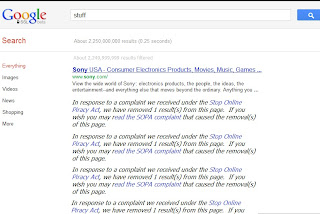 Fortunately the “Epic Fail Toys” man isn’t the only one talking about SOPA. There was another video sent to me, made by “The Cynical Brit.” There was also an article on the Forbes website, “How SOPA Could Ruin My Life” by Paul Tassi, a writer, and a small business owner operating from his website, “a movie/tv/video game site that I started with a partner about three years ago.” SOPA, he feels, will cause him and others to close down. The bill, he fears, “reeks of Chinese and Iranian Internet policies that allow the government to simply censor the Internet the way they see fit ... their definition of what piracy is ends up including most of the Internet, including my own site, and the punishments for even minor infringements could be catastrophic and run me out of business completely.”

Also opposing it is David Ulevitvh, the head of the Internet business Open DNS. "The legislation has the potential to create the great firewall of America," he told a CNET reporter. The bill “is written so broadly that it will invite abuses,” and would be bad for businesses like his, which would have to reincorporate as offshore companies.

So why is this bill making any headway in Congress at all? Tassi claimed many of the Representatives who went over it in committee “admitted to not knowing how to use the internet. The consensus among them was merely ‘ piracy sounds bad, therefore we should pass this anti-piracy bill ‘ without any further investigation into its deeper implications. Implications that would in effect, destroy the entire idea behind the Internet.”

Ulevith himself went to Washington to talk with Congressmen. What he saw was not good news, "Everything they were hearing from people who came to their door every day is fervent support (for SOPA) ... There was nobody sitting on the other side of the table opposing it ...The amount of perspective and influence we have in DC is essentially non-existent. it's not serving us well anymore."

Amendments to the bill have been rejected, and Congress is set to debate it sometime “early next year.” How it will affect Second Life is unclear, though as the Grid has been targeted before for copyright infringement, some are predicting a chilling effect as radio streams and roleplay regions shut down out of fear of lawsuits. Among those expressing worry, Nydia Tungsten, whom worried she would have to give a certain announcement:

Because the US goverment has been bought by the recording industry, KVXN will be off the air until further notice. I am sorry to have to do this, but I don't want solders kicking in my doors because i am playing music for others to hear, so until we know how and where this is going....this is KVXN Signing off.....

“KVXN Shutting down forever is a REAL possibility, we need to let those fools in Washington know that WE know this is them lining their pockets again.”

Big Business can be beaten. This week, less than a day after Verizon Wireless announced a fee for paying their bills, a public outcry brought it down. Will this also be the case for SOPA, or will the United States join China in censoring the Internet? Tassi went on to write about a "VETO SOPA" Petition that got over 26,000 signatures in two days (as of when this article was written, it's over 44,000). He wasn't sure what the White House would say, but, "Until then, keep signing. It can’t hurt."

I can’t tell others what to do, but I have sent emails to my Congressman and Senators asking them to oppose this dirty SOPA.