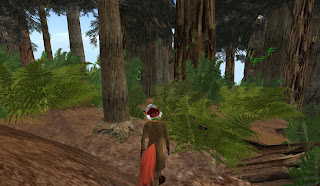 In November, there were a number of performances of two works at the LEA6 sim by artist Tyrehl Byk. Longtime readers will probably remember him for his “Event Horizon” particle show over a year and a half ago. Besides his new particle show “Catharsis” (more on it later), there was also his “Not -A-Knot” artistic exhibit.

When I got to his “Not-A-Knot” Exhibit, high above the sim, it looked much like a nature build at first, a small fenced stone platform leading to a forest full of tall trees on a floating island of rock. Going along however, one could see letters floating with the wind through the woods. Next to a campsite was a river, with various words such as “illusion” and “prejudice” floating down, the water eventually falling over the side. With the forest thinning, the letters in the breeze gave way to words such as “apple” and “tree.” 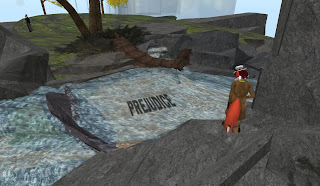 Finally one arrived at what at first looked like a recreation of the scene of “American Gothic,” a farmer and his lady in front of their farmhouse. But this wasn’t the bald, spectacled farmer in the famous painting, but Tyrehl Byk. His voice was on, but instead of him talking I could only hear nonsensical noises. I thought he was Away From Keyboard as he never answered by questions. The farmhouse itself kept fading in and out. Next to it was the edge of the floating island, the words “Not A Dangerous Ledge” floating over it. I never did go over to test it. 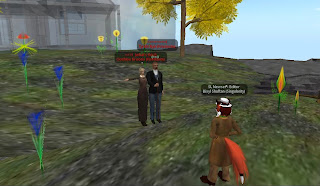 Later on at his “Catharsis” set, I had a few words with Tyrehl. Asking him about the American Gothic theme, he answered “That was just one component of it. It is a very large, very complex build with much subtlety, and it comes alive more when I'm there actually doing a performance. Many folks rush through and only see the surface of it.. So much like how they navigate off-world. It's tricky to see the depth when one gets hung up on surfaces. There are also many hidden items that are in play if you look hard enough and touch/sit on many things.”

“When I'm there, there is an additional layer of confusion brought to bear and some find it very disorienting. There is an element of disconnect many people rely on when coming in-world. The meaning of the piece is constantly changing and depends on if one is there alone, or traveling with a group. The dialog changes and is sometimes private and sometimes public. It is very much like the layers of internal monologue that go on inside everyone, echoed in different ways externally.”

I neglected to ask if the “Not-A-Knot” exhibit regularly changes, but presumably it does. So perhaps next time it’s open, it will be different. The November exhibit was at LEA6 (173, 192, 501).