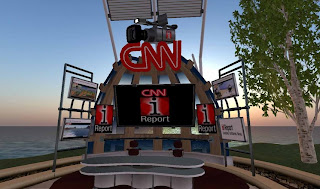 Second Life Newser was informed by CNN iReporter Any1 Gynoid that CNN Island would be closing down. The news came from two CNN producers known inworld as Nichole and Henry ireport at an iReporter meeting at the place yesterday on Tuesday December 27th.

Janey Bracken, who wrote about the closing for iReport, quoted Nicole as saying, “We set up shop here in 2008 because we wanted to see what it was like to participate in a real-time community, in a virtual world no less. We didn't know what to expect. The prospect was a little scary, to be completely honest.”

“We've realized that there's a whole culture in-world, and we met so many people and acquired amazing threads and dance moves. Our comfort level grew, and we really feel like we've come to know you. It's been a few years now and we're thoroughly appreciative of this community we've had a privilege to be a part of. We are all proud of what we accomplished here and excited about the future. Just wanted you to know that.”

“We wanted to let you know that we'll never forget our meetings, amazing hair and of course the incredible figures on our avatars. (laughter) We wish we looked like this in real life. It's truly been one of my favourite projects at CNN, and I think others will agree.”

Janey, felt the reason for the closing was “the hectic politics of today’s real world leaves CNN people with little time to cover everything, let alone a fun thing like Second Life.“ But the political season in 2008 didn’t seem to affect iReports then ( the SL iReports page though hadn’t updated since 2008, though). There were some whispers in March that the location would be closing, but the rumors turned out to be false. 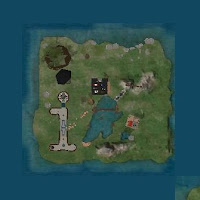 CNN will still be publishing articles on Second Life, though it’s unclear if Nicole and Henry will still be logging on, “There are still some of the finer points to work out, but CNN will let us know very soon what else is happening. There will be a farewell party on CNN Island on Thursday at 2pm SLT.”

CNN has been one of the last real-life businesses to retain an in-world location in Second Life, most having left the Grid after the media spotlight largely drifted away. In April, IBM closed it's three art exhibition sims.