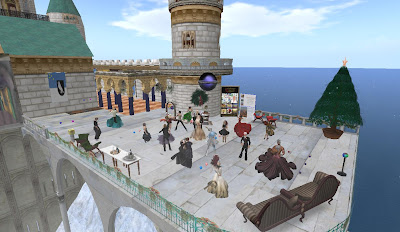 On Saturday December 10th at 11AM, the CDS had their Inaugural Ball to celebrate their new representative leaders. Last month, there was an attempt by their old Assembly to delay elections due to technical glitches, but the residents responded with a protest. Their leaders relented, and after elections were held their 16th Assembly was elected along with Chancellor Trebor Warcliffe.

The Ball was held at the Schloss Balcony in the Neufreistadt sim. The location was high over the land at a height one would expect of a floating platform. It was just at cloud level, making for some whispy visual images when looked at certain distances. Callipygian Christensen provided the music, which included classical and formal tunes.
Posted by Bixyl Shuftan at 12:00 PM