Get a Meeroo at Sunweaver Air: Rita Mariner’s Meeroos

If you’re a Second Life resident, you’re probably familiar with one of the most popular virtual pets on the Grid, if not the most popular. Looking at you with their adorable puppy-dog eyes making those “churrrrr” sounds, they never fail to get an “Awwww” from passersby. We are of course referring to those lovable Meeroos. 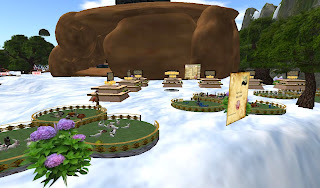 One doesn’t need to go far to find a Meeroo breeder looking to sell some of the critters. Right next to the Second Life Newspaper office, Rita Mariner keeps a number of Meeroos. She enjoys them a lot, but is looking for good homes for some of them.

Asking her what the attraction was, “First thing I like about them is that you can actually pick them up and cuddle them.” With the Meeroo HUD on, Rita told the critters will seek you out and beg to be snuggled. To those who think breedables cause too much lag, she answered, “These breedables are designed to work, in that they go into reduced activity mode, should sim dilation be detected. Also they act like real pets, that when the sun goes down, they go to sleep.”

Rita commented in several ways, the Meeroos were like a game, “You have to match up various traits to get them to breed, they way you want them too. They come in various species, coats, sizes and personalities. You can get ears shapes, tails, eyes and head shapes. You have to check the chart to see all that is available. They just added several new species and coats to the mix, I think only the oldest breeders are getting them right now and they are fetching premium prices right now. I have seen prices on some of the rare Meeroos as high as 250,000L. You need two to breed, and siblings can’t breed with each other, nor with their parents.” 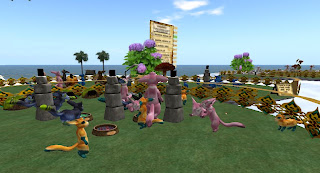 Rita told that one can get most varieties of Meeroos from her, “I just got my first Jubilee.” For beginning owners, she recommends, getting individual Meeroos, “the fun part is when you get a new nest is you never know what you get until you toggle it. I have been surprised several times to see a totally different species Meeroo come out of a pair of my ‘roos. I have to look at them and wonder what those two have been up too, behind my back.” Rita explained a new Meeroo owner could easily end up with a rare after a couple have offspring, “I got a Jubilee out of my Pharaohs.”

Meeroos come in several sizes, “teacup, toy, small, average, medium, large, giant. Giant gets almost as big as my little daughter.” To add to the fun, “The Meeroos also dig up treasures for you to find and click on. At holidays, they creators add in special treasures just for the holidays. These gain you regard points. Regard points are like experience points. The more you get, the greater chance of unlocking different traits in your Meeroos. Your Meeroos also gain regard points through petting. They max out at 7500 points, so the faster you get them maxed out the better, since they only breed for 55 days, about once every 5 days. So you can get about 11 nests out each pair.” 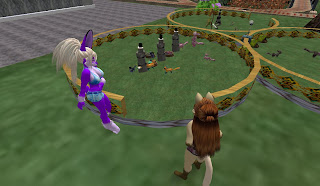 Besides petting one’s own Meeroos for regard points, “you gain them by petting others 'roos, coaxing a nest, answering the oracle correctly, releasing a 'roo to the wild.”at age 60 days a 'roo becomes elderly and will not produce anymore nests. you have a choice to make. 1) keep them as is, but they still require food. 2) "Meepet" them, and that requires the 999L Meepet option, but they become a permanent pet and no longer require regular food 3) Release them into the wild. the last 2 you gain their stored up regard pints for yourself.”

“It is surprising how addicting they have become. *laughs* They are a lot of fun to have around, but watch out, they are very addicting. Like the old saying, ‘You can't eat just one’? You can't have just one. *laughs*”

For those truly addicted, Rita mentioned there are Meeroo avatars available. Or rather, anthro Meeroo modification kits for the furry chinchilla avatar, “available only on Curious Sim.” The kits come individually, or in “fat packs,” “Limited Edition ones are available only till Dec 31st.”

So if you’re interested in getting one or more pet Meeroos, go see Rita Mariner at Sunweaver Air.