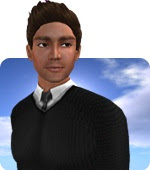 Last week, New World Notes reported that Frank Ambrose, known as FJ Linden inworld, Linden Lab's Senior VP of Global Technology, had left Linden Lab. He was in charge of Grid stability and user support. His technical updates were praised by some, Blogger Inara Pey calling him an "Unsung hero" of Second Life.

Daniel Voyager brought up his First Quarter update, noting the praise it got from residents, notably about the group limit raised from 25 to 42. Hamlet Au noted FJ's departure comes just after Kim Salzer's leaving the Lab. He thought of two reasons this might not be a coindidence. One was the possibility of a continuing trend of moving away from the Lab's early idealism. The second scenerio was the two getting the hint the New CEO Mark Humble prefered to deal with people appointed under his watch. Either way, it means two major figures have left in two months.