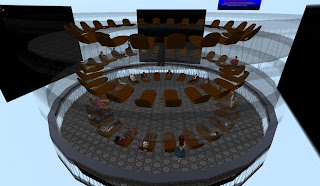 Tyrehl Byk, whom made news last year with his groundbreaking “Event Horizon” particle show last year, was a busy artist in November with his shows at the LEA6 sim. Besides his “Not-A-Knot” exhibit, Tyrehl had another particle show, “Catharsis.” It offered all of what Event Horizon had, and then some.

I was with Chantal Harvey when she was sent a location to go to see Catharsis. She invited me to go along, and I went with her. But getting there, we found ourselves in a cavern. We looked around, things slowly rezzing, and eventually one of us found a passage to a door. Clicking on it teleported us to a triple overhead platform. I noticed a few other familiar faces there, such as Gemma Cleanslate and Eymerich Lane. For a while, the radio had a robotic voice greeting the crowd, then it began making snide remarks about Tyrehl Byk. It was cut short by a gun shot, followed by Tyrehl apologizing for being late, giving a few hints to properly view the show, such as setting the view to Midnight, and telling those who hadn’t to take a seat. 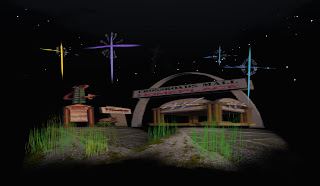 And before long, the music started, along with the colorful particle flashes in the night sky.The particles were a little more sophisticated than last time, taking on the shapes of buildings, roads, yards, even entire pictures. After a while, the show took on a certain theme, more so than it did with “Event Horizon.” The first segment after the introduction could be called “Jesusland” after one of the songs played, a look at the American south known for it’s churches but becoming more and more around discount shopping malls. The second segment could be described from the line of one of the songs, “Buy it now!” There were a few money themed songs, with plenty of particles of dollar signs, pound symbols, and other currencies, with pictures of avatars living it up. 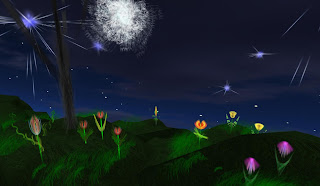 Segment three was a brief play of American Indian music along with a scene of a desert mesa. Then the music changed to “I Wanna Rock an’ Roll All Night,” and the screen was filled with lots of splashes of particles. Then came a sunset, with more American Indian music, and images of pairs of faces could be seen. This was followed by arrows flying across the screen, splashes of red, then the screen turning to night. And as the night went on, the bleak landscape began to bloom.

The show ended after about 24 minutes. When our eyes fell back to our virtual surroundings, we found another surprise, the floor was covered with pink flower petals. Tyrehl received plenty of complements, “Thank you for the great show, Trehl.” “Gotta say, came here not knowing what to expect... good thing too because I wouldn't have come close.“ Chantal thought of the old Event Horizon show, “but it is so much better now.”

“Catharsis” is over now. Chantal and I had come across one of the final showings in November. But it may appear again on the Grid again.