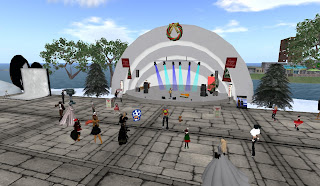 On Saturday December 3rd, Bay City held it’s official Treelighting Festival. At the North Channel Island sim, the area had been given a winter look with snow on the ground and an ice rink in the middle of the park, complete with a box where one could pick up free skates. In the middle was a fair-sized evergreen tree, decorated with a number of ornaments on it. East of the park was a small amphitheater, where for a few hours musicians played for a crowd. Not everyone at the sim was dancing. Some skated on the rink while listening to the music.

“Welcome all awesome cats to the annual Bay City Treelighting festival! Great fun with you all! Please checkout all of the silent auctions "around the block" of the awesome tree. All proceeds are going to the Child's Play charity, which exist to improve the lives of kids in hospitals... and in the holiday season it's most important! For more info, checkout http://childsplaycharity.org/ - Help us raise a LOT to help those who need our support. You're all awesome! Thanks for coming!” 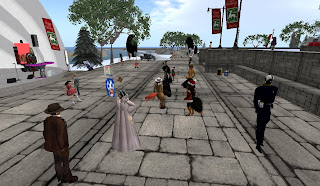 Marianne McCann, a noted Bay City resident, every so often would remind the people about the items about the park which were part of the silent auction. Many were 2-D avatars of various gaming characters from Nintendo games. But there were others, such as an antique Model A car. Talking to Marianne, she told me this was the second tree lighting festival at Bay City. They wanted to make it more special, so they made it a fundraiser event. The group involved was Child’s Play, “a game industry charity dedicated to improving the lives of children with toys and games in our network of over 70 hospitals worldwide.” The event was mentioned on the Child’s Play website.

From about Noon to 2 PM, GoSpeed Racer DJed for the residents dancing nearby, entertaining them with Xmas songs such as the “Miser Brothers” themes, the there from “The Grinch,” Twisted Sister’s “Heavy Metal Christmas,” and a number of parodies. At 2PM, young avatar Christov Kohnke got up and stage, and began singing live music with his guitar. 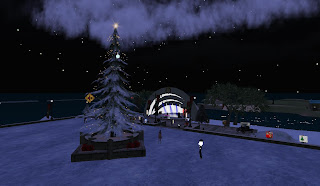 At 2:30, attention was directed to the rink, and residents asked to change their views to Midnight. Doing so, the tree was a dark outline for a moment, then lit up as the lights on it illuminated, making for a beautiful holiday sight. The party would go on until 4 PM. As of 3PM, over 27 thousand Lindens had been raised for the charity.

The Second Life Wiki describes Bay City as created by Linden Lab’s Department of Public Works program in 2008 as a homage to the golden age of the North American city, “between 1940 and 1965, perhaps best typified by Chicago circa 1950 and marked by a distinct deco influence."