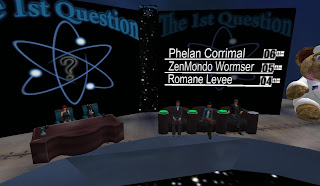 Sunday December 11th marked the last show of the season for the noted Second Life game show "The 1st Question," hosted by Pooky Amsterdam and Hydra Shaftoe. Three of the top winners this year were invited back in a contest of champions.

Originally scheduled on December 4th, the show was postponed a week due to technical difficulties. And this Sunday, glitches threatened to stop the show again. Fortunately, regulars such as comedian Lauren Weyland had no trouble bringing out chuckles from the others to pass the time. Plus, there was Pooky's band of tiny friends, doing a "Tiny Carolers" routine. 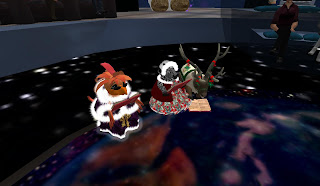 Pooky tried a few things, including appearing in a tiny sheep avatar, which looked like a cartoonish sight next to Hydra's wolflike black anthro husky appearance. Eventually she logged back on in an alt, and the show continued. Pooky apologized for the delays, praising the audience for their paitence. She commented if she ever got stranded on a deserted island, she'd be confident of rescue with this group of people with her. 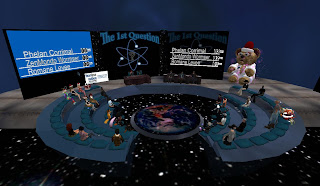 Phelan Corrimal, ZenMonso Wormser, Romane Levee were the previous show winners whom were the contestants for this show. Besides that it was a show among former champions, the show was unique that in the "Word Up" in which the audience was asked to judge which made-up word of the players was the best, it was a three way tie. Pooky gave each of them full credit for that part of the show. The contest was a hard-fought one between the three men, but eventually ZenMonso Wormser emerged as the winner, and the season champion.

The audience was a little sad that this was the last show until next year, but they were also sad about an announcement. Co-host Hydra Shaftoe announced this was his last appearance. He didn't have any problems with Pooky, offering to help out next episode with troubleshooting behind the scenes. He simply felt that with nearly 140 shows behind him, it was time for him to move on. The announcement was greeted with sadness by many in the audience, including one whom had just seen the show for the first time, and thought Hydra made a great co-host.

With his sharp voice and quick wit, it's fair to say Hydra Shaftoe helped make the 1st Question what it is, and wherever he goes, a number are wishing him well.