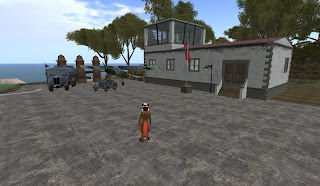 On Thursday December 1st, the Tataria sim in the New Bastogne combat roleplay region was re-opened. There was an official ceremony by the German teams at 2PM, with Vickster Kuhn presiding,

Please join us for our rededication of the Tataria Sim in the Bastogne Combat Area! Tataria has gotten a makeover! It now depicts Anzio, Italy, 1944. The sim features a new Luftwaffe Airfield and spectacular views. All members are invited to attend the ceremony.


Tataria used to be a mix of themes, a Japanese navy base next to a small Nationalist Chinese base and the Great Wall, and further away a small Romanian base. They were torn down and in their place an Italian theme. To the north is a Luftwaffe airfield. To the south across a bridge is a small Italian coastal village. To the east is a beach, and to the west railroad track and woods. 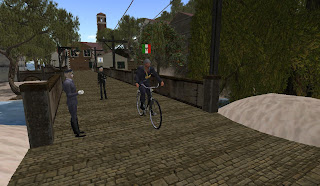 I wasn’t able to attend the ceremony, though pictures provided show more than a dozen of the German and Italian teams were able to make it. A few of the women fighters hung around after the ceremony as an Italian soldier peddled away on a bicycle. Asked how the place looked, soldier Flea Habilis answered, “I’d say the appearance is top-notch. I defy anyone to find a sim that has as much creativity and decoration as this and *still* host open combat. ... It reminds me of a real military base. I like the high walls around the houses. Details like that sometimes go overlooked.”

“I suppose I also like the bell tower. I’m drawn to good sniping positions.” Flea doubted there’d be pitched battles for it, though, “people around here like to run and gun. ... I suppose that’s better than it is in a lot of first-person-shooter games where you have fifteen snipers and one foot soldier.”

Corporal Angelblue Xeno was in a 1940’s-era swimsuit enjoying the Italian beach, “Yes, my swimsuit is period wear, hee-hee! ... As soon as the parade was over, I headed to the beach, ha ha! There will be no combat today. There’s too much to discover and toys to play with. I went to Italy when I was very young. I can remember the chou chou nuts salesmen on the beach, they were always covered in sand (laughter).”

“Wait until it’s nighttime,” Angelblue told, “Have you seen the lamp light? You must look ... and notice the little flies attracted to the light. Oh, the church. You must play the organ in there. The lighting effect as you get near the altar is amazing. ... getting some real nice dawn reflections in the water, going right up into the lilies in the water past the bridge.” I would later see her flying a seaplane around.

Emil Byon was the administrator of the new Anzio sim. He explains the decision was made to give the place a new look in November,”Tataria had many difficulties for combat, so we proposed a new sim ... we chose to do Italy and the Mediterranean Sea. ... We had the Afrika Corp, France, Russia, D-Day, Belgium, but never Italy and the Mediterranean. In real life, this was the first door to Europe for the Allies. It’s a very important front.” He had never heard of anyone else trying to recreate Anzio on the grid. 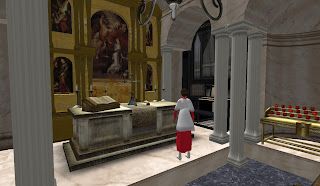 Emil told Anzio will differ a bit from the other sims in New Bastogne, “This is not just a battle sim.” He wanted aspects of a social sim, “with cultural and historical activities, not just combat.” He planned to have religious services at the village church. While there may be some people roleplaying as nuns and altar boys, there will be at least one priest whom is also one in real life. Emil described the feedback so far as very positive, “I think the people really like it.”

I had the impression Anzio was open to visitors, at least for now, but it is part of a combat roleplay. Those not part of the teams are asked not to interfere in any combat, or they will be asked to leave. To join a side, get in contact with one of the administrators such as Vickster Kuhn or AngusGraham Ceawlin.