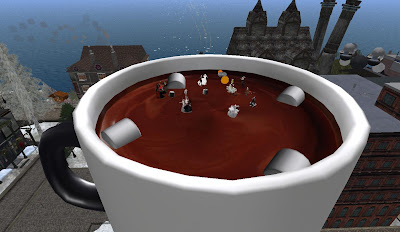 At Steelhead City on Saturday Dec 17th at 7PM, there was a "Hot Cocoa" dance. This may not sound unusual at first, but in this town with its share of mad scientists, they went over the top. A cup of hot chocolate was enlarged and the surface of the liquid solidified to walk on. But the marshmallows remained soft and fluffy.

About a dozen attended the dance, human, elven, lycan, and young & old. The music was provided by Sheriff "Fuzzball" Ortega, whom found some "sweet music" for the chocolate lovers. Tips got a comment from a message machine, "Thank you, now I can afford a bigger cup of hot cocoa."

Baron Klaus Wulfenbach was among those attending the dance. Some of the others had some unusual costumes with marshamallow themes, including one woman whom came all in white including some make up. Another wore an outfit with matching smiling marshmallow hat and backpack. A third wore, "In case anyone can't read my shirt it says, 'I torture marshmallows.' "

Everyone had a "sweet" time that evening.
Posted by Bixyl Shuftan at 6:00 AM