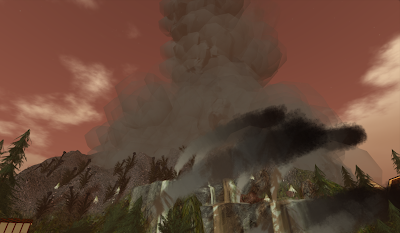 On Friday evening May 18th, Mount St. Helens in the Steelhead Estates erupted. The event began sometime around 7PM SL time. Eugenia Burton, a resident of Steelhead, provided the following picture, showing huge, billowing clouds of ash rising into the air, and the skies a striking shade of blood red. The mountaintop was gone, and much of St. Helens scarred, blackened trunks of trees on the sides of the volcano knocked over.

Yours truly wasn't able to get to the event, or the volcano party that was planned to take place by the lake near St. Helens (provided the ash cloud didn't blow their way). But stopping by the following morning, there was still an ash cloud over St. Helens. The event was more ash and less lava than a similar eruption in August 2011.

May 18 is the anniversary of the 1980 eruption of the real-life Mount St. Helens, as well as the birthday of Steelhead resident Tensai Hilra.