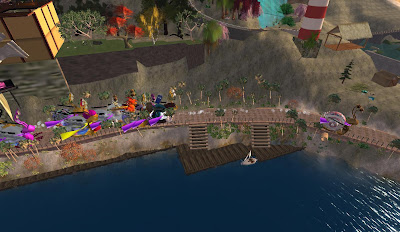 On Saturday May 26, RacerX Gullwing held this month's cross-sim Giant Snail Race. This would be the biggest so far this year, passing through dozens of sims on the mainland. Someone told me there were a total of about sixty sim crossings involved, and thus sixty more chances for something to go wrong.

The race started at a traffic circle in the southeast corner in the Fillip sim, at the northern edge of the mainland atol continent of Heterocera (Gemma Cleanslate wrote on the railroad there earlier). For about forty minutes since zipping past the "Motel 7" inn nearby, the snails slimed their way along the western coast of the land, going past some costal scenery.

Gareth8 Albatros, the winner of last month's race, was "pimped" out in a Union-Jack painted shell. He maintained a good-sized lead, and it looked like he was going to win again. But as they say in Second Life, "lag happens." And a few lag mishaps resulted in the pack catching up to him. At the finish line in Calleta, near the Hobo Railroad Infohub, it was a close finish, but Tindallia Soothsayer was the winner by less than a Giant Snail's length. Spoke Gareth, "Wow, that must be the closest finish ever!" Third was a name I'd never seen at the Snail Races before, Second Life blogger DrFran Babcock.

See a few more pictures of the race on my Flickr page.

*Update* The recording of the race on Treet.tv is now available.