Jaycatt & Frogg Sing at Key West for the Relay 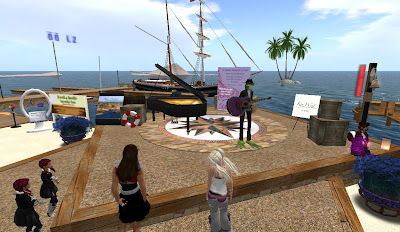 Among the events for the Relay for Life last weekend were the popular Second Life musicians Jaycatt Nico and Frogg Marlowe, known as "Jaycatt and Frogg," performing at Key West Island on Sunday afternoon April 29th at 1PM SL time.

The event was organized by SL Music Races for a Cure, and took place at the Key West Marina & Yacht Club. Other singers that afternoon included Marky Helstein and the popular Maxilillion Kleene.
Posted by Bixyl Shuftan at 6:01 AM