Gracie Kendal, known as Kristine Schomaker in real life, announced yesterday her "1000 Avatar Project" will soon be taken down from the Grid. Starting in October 2010, she had taken her 1000th avatar picture by Jan 2011 and kept on going to 2000, which she reached later that year. 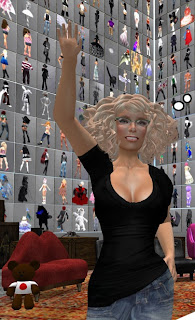 I want to thank you all so much for your love and support in following and being part of the 1000+ Avatar Project. I am so very proud of the work I have created here and I am glad I have been able to share it with the Second Life community. I think the work speaks for itself in showing the wonderful diversity that we all share here. The lives we create and live and the imagination that you all have shared shows that Second Life is much more than… well the media makes it out to be. I am proud to be a member of the Second Life community and I will continue to pass on its wonders, its capabilities and I will continue to forge ahead as one of the pioneers of this new media art form.

The project has gone through so much since it started in October 2010. I have published 2 books, the installation itself has moved several times and most recently I created a mixed reality installation/performance using a selection from the project in an exhibit in Los Angeles and Second Life.

The whole experience of shooting the portraits, working with my great friend Nikki on publishing the books, putting together the RL/SL art installation and standing back to see what I have done is something I will never forget. I have met so many amazing people along the way. more then 2000 of them )

Some people have asked me, why I don’t go for 3000 or 10,000 avatars now. At first I kind of laughed it off and said… we’ll see. But as with my paintings, I know when I am finished. It is just a feeling you get. You look at the work you have created and you just know. It is done.

Gracie's exhibits will remain up until June 3, 2012. Until then, people can check out her "100 Avatar Project" at the Coyote sim (95, 166, 1430), and her real-life/Second Life installation at Seraph City (137, 206, 107) where her recent performance art crossing the real and virtual worlds took place. On the last day, there will be a farewell party at both locations from Noon to 3PM SL time. It is open to all.

"Thank you again so much for your love and support!!"
Posted by Bixyl Shuftan at 6:01 AM