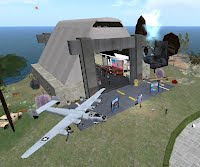 On Sunday May 27th, Patriot Island held it's monthly Wounded Warrior benefit. Held at the hangar bay stage in the eastern part of the sim, musicians performed for the crowd as they donated cash into two kiosks on either side of the stage, resembling overturned helmets. It was Memorial Day weekend, and the bar was set high. It was announced their goal was a total amount of 275,000 Lindens that night.

For the first hour, Avantgarde Frequency performed for the crowd as the Lindens were tossed into the helmet kiosks, strumming his guitar. Then came Frets Nirvana, the organizer of the event, with his own guitar. Following Frets was Voodoo Shilton, and Mulder Watts on stage together. The audience numbered close to fifty residents at times. Among them were CNN iReporter Any1 Gynoid, and two leading members of the RFL Passionate Redheads team, Sabine McGettin and Dusk Griswold.

As time went on, the Lindens piled up. Occasionally someone offered to chip in an amount, such as 500 or 1000 Lindens, if someone matched their donations. "Come on, this is for a good cause guys! Who's gonna match me?" While Frets Nirvana played, the total passed 200,000 Lindens. When his time on stage was up at 8PM, the total raised was a little shy of the goal at 239,000 Lindens.

Patriot Island is owned by the US Military Veterans Group. Besides home to a community of vets and the location of public events, it is in part a memorial site, a replica of the Tomb of Unknowns in the center. So visitors are asked to be respectful while visiting. The Wounded Warrior Project is a nonprofit group devoted to "honor and empower wounded warriors" of the US Military. The Project "began when several individuals took small, inspired actions to help others in need. The resulting objective was to provide tangible support for the severely wounded and help them on the road to healing, both physically and mentally."