Trader Whiplash Gets Bid Bald in Relay for Life Event 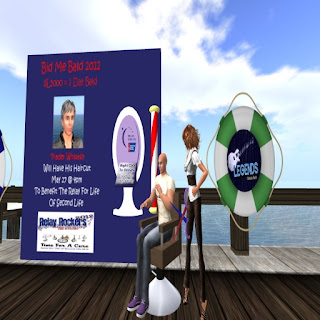 This Sunday May 27th, Trader1 Whiplash was the volunteer (victim) for a "Bid Me Bald" event by the Relay Rockers. Trader had agreed to be hairless for a day for each five thousand Lindens raised. The event raised 41,000 Lindens, so Trader will be bald for a total of eight days.

A notecard stated the event was started "by Trader Whiplash and the Relay Rockers team in 2007. The team had promised to go bald with Trader if he lost his hair during his treatment for Leukemia. Trader suggested instead that a fund raising event be created where people could honor survivors by allowing themselves to be 'Bid Bald.' Since that point the Rockers have raised 100s of 1000s of $L with its signature event. It is shared by many other teams and has spwaned many other Bid Me Events. Traditionally each year Trader is the first to be Bid Bald by the Rockers."

Trader will be able to get his hair back on June 5th.
Posted by Bixyl Shuftan at 6:30 AM