Some sad news for users of SL Go, the program that allowed users of tablets to use Second Life, in addition to improving the performance on older computers. The service was not truly a product by Linden Lab, but done by OnLive in cooperation with the Lab. Unfortunetly, this product's days are numbered. Yesterday on April 2, OnLive announced they had been bought by Sony, and SL Go and other services of theirs would soon be coming to an end.

After five years of uninterrupted service, the OnLive Game Service will be coming to an end. Sony is acquiring important parts of OnLive, and their plans don’t include a continuation of the game service in its current form. Your service should continue uninterrupted until April 30, 2015. No further subscription fees will be charged, and you can continue to play all of your games until that date.

As the first-ever game streaming service of its kind, everyone who has ever played a game using OnLive has contributed to the technology and its evolution in some way. We’re immensely proud of what’s been achieved and extend our heartfelt gratitude to you for being a part of the OnLive Game Service.

Onlive had their own message for users of SLGo, saying they would continue the service until April 30, and they would no longer charge for their services, "no further subscription fees will be charged."

In our year of SL Go service, we have become quite close to the Second Life® community. Thanks to your patronage and constructive feedback, SL Go became one of OnLive’s most successful services. We know how important SL Go is for many of you, and it saddens us to bring the service to a close. We extend our heartfelt gratitude to you for being a part of “SL Go by OnLive” and wish you all the best.


So why did OnLive fail as a company? Kyle Orland, the senior gaming editor of Ars Technica, wrote, "Looking back, it seems OnLive was just a little bit too far ahead of the curve, both in terms of market readiness and the Internet infrastructure necessary for streaming games. As low-latency bandwidth continues to become cheaper and more accessible around the world, it seems likely someone will nail the correct combination of business model, game selection, and easy-to-use interface to become the industry's answer to Netflix. That company will owe a debt to OnLive for getting the ball rolling and proving that streaming gaming was something that was worth trying in the first place."

Of SL Go closing down, Inara Pey wrote, "This is and unfortunate end, not just for SL Go, but also for everyone at OnLive, a company which had come through a lot to provide a unique on-line gaming service and which has tried to enter a very unique environment with SL Go, and has done so by providing a very successful approach to providing Second Life to people while on the move through their delivery to Android and iPad devices, and to those using older, lower-specification hardware.


"I’ve been fortunate enough to be somewhat closely involved in SL Go, initially being offered the opportunity to help beta the product, and then in helping to report on and promote the service, and (hopefully) provide OnLive, through Dennis and his team with useful feedback, support and advice.
As such, I’d like to take this opportunity to offer Dennis, Jeff, Shae, Jersey, Robby and everyone else at OnLive involved in SL Go – including Jane Anderson in the US and Mark Bevan here in the UK,  my thanks and my heartfelt best wishes for the future. I do, however hope that we’ll continue to able to see one another in-world, at the very least." 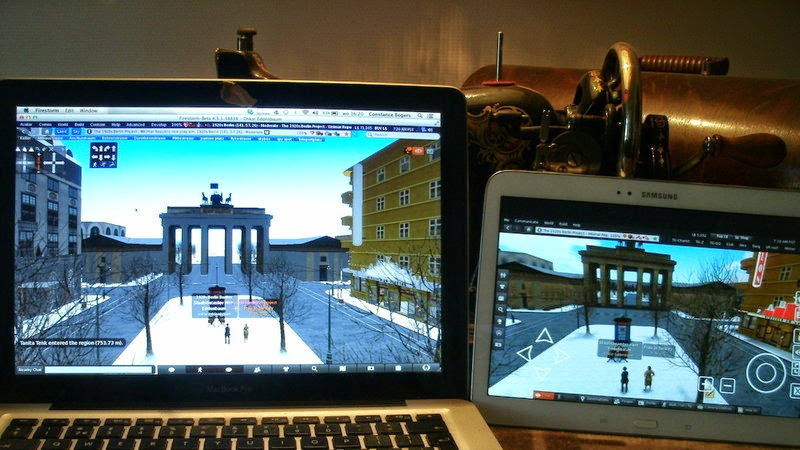 Hamlet Au commented, " I once consulted for OnLive, and SL Go was a media partner, but now that the company is ceasing operations, I can say without even having to make a full disclosure that SL Go was just about the best thing to happen to Second Life in a long time, and I'm sorry to see it go." He did suggest there was a possibility that Sony might enable Playstation owners to stream Second Life from their consoles.

So after a year, the platform that brought Second Life to tablets is being put to pasture. But there may be a last chance for it. Fans of SL Go started a petition on change.org , calling on Sony to continue it. For those interested: Click here to sign the petition.