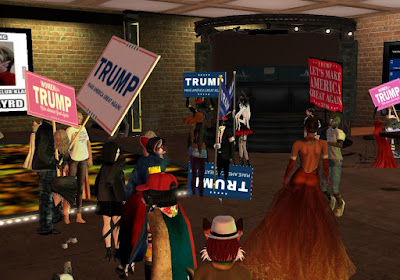 Last night was certainly a nail-biter of a Presidential election, the winner not being decided until close to Midnight SL time (3AM EST). But with four states yet to be decided at the writing of this brief, the Electoral College total is 278 to 218 in favor of the Republican Party's nomine Donald Trump. This was something as a surprise as while the polls were a statistical dead head, most showed Clinton slightly ahead. But once again, Trump surprised friend and opponent alike and got a slight lead in the popular and Electoral vote.

At certain places in Second Life, such as the Bay City Clinton HQ and the Trump Pub (pictured above), people gathered to discuss the election and await the results. Over group chats, such as that of my home community the Sunweavers, there was quite a bit of chatter, some cheering, some despairing, and some simply watching the whole thing with fascination. Over my Facebook feed, there were a number of cheers from supporters and many seemingly almost in tears or in rage. Not that many had neutral comments about Trump's victory.

I'll have more to say later. But for now, time for a little rest.