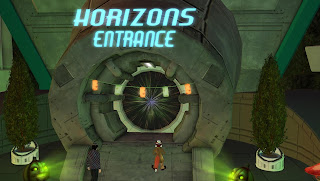 When Linden Lab unveiled their Horizons Residential Regions on Tuesday, they released something else for the residents as well: a new game. As the games six sims are in the middle of the Horizons homes, the Lab is calling it "Horizons Experience." Dr. Talpa, the villain from last year's Paleoquest game, is back, having kidnapped a prisoner. And once again Magellan Linden is "too busy" to deal with it and is asking the residents for help in rescuing her. 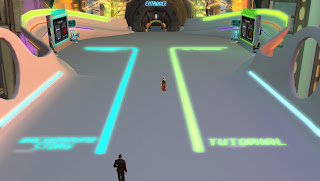 The Horizons experience takes you through six regions starting out in the great advanced city itself.  Here, Residents are introduced to the challenges that await, so be sure to check out the videos outlining the great adventure. Your journey will take you from towering canyons to dark and deadly mines, all the way through forests and swamps,and finally, to the command center where Tyrah awaits her rescue.

This 5 quest storyline takes you through various challenges laid out by the evil Dr. Talpa.  Everything from vicious splorches, killer robots, laser defense systems, the terrifying pet Fluffy, all the way to hidden traps, mazes, puzzles and more!  Residents will have to use the provided weapons to defeat menacing foes, while taking on other elements with their own wit. But beware, saving Tyrah won’t be as simple as conquering these challenges.  The greatest adversary you face is the clock winding down to 0.  Can you save Tyrah in time? 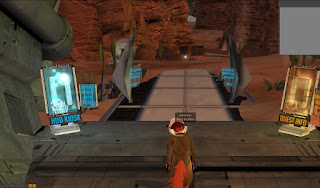 The first of the sims, called the landing base, is for tutorials and where those completing it can pick up their rewards. Upon entering, you have a choice of being a player or explorer. Those who chose to explore around can fly around, but won't be able to interact with anything, though will still be knocked out if they run into hazards. The players of course get to play the game, getting a simple HUD which keeps track of how many levels they've gone through, one per sim. 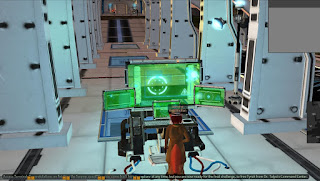 The beginning of each level offers you the chance to pick up your HUD again if you lost it, and a notecard with simple instructions on what to do. Getting through each level means doing a task within a certain amount of time. If you get clobbered by any of the hazards, which can be anything from toxic water, to creatures, to vacuums, to killer robots, and more, you get send to the level's "resurrection circle" to start again, though if you've done the task already you don't need to repeat it. That is, unless time runs out, in which case you get sent back and the clock is reset, and you need to do the quest again. At the end of the first four levels is a panel you click on to progress to the next one. At the end of the fifth is the prisoner. 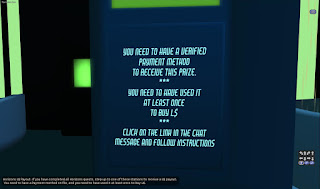 Here's a video tutorial of the game, which includes a look at all five levels. The fifth one is the most difficult of course. But with a woman about to be turned into a robotic slave, you're not going to let that stop you, will you?

After completing the game and returning to the landing base, players have a choice of receiving a random prize, or a Linden dollar prize. But in order to qualify for the latter, your account needs to have bought Linden dollars at least once from the Lab.

Giving the game a try myself, I eventually finished the first four levels . The fifth has been a hard nut to crack though. No doubt many residents will be braving the dangers to get the prizes.