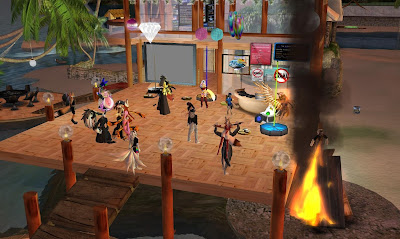 "Remember, remember, the Fifth of November." In Britain, Guy Fawkes Day/Bonfire Night. In 1605, a group of conspirators plotted to blow up Parliament and the King, with Guy Fawkes guarding the gunpowder. But the "Gunpowder Plot" was discovered and Guy Fawkes captured and later executed. The English people celebrated their king escaping harm that night by burning bonfires, and have been doing so ever since, with fireworks and the practice of burning effigies of Guy Fawkes later added. In more recent history, Guy Fawkes has become something of a symbol or anti-government resistance with the character "V" in "V for Vendetta" wearing a Guy Fawkes mask and it's adoption by "Anonymous" as a symbol of theirs. 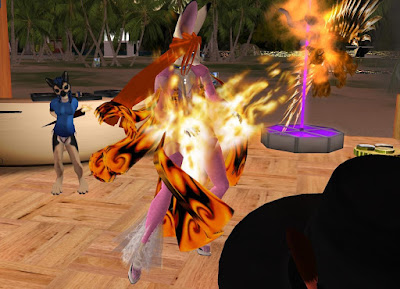 Guy Fawkes Day/Bonfire Night was celebrated in some places in Second Life with numbers of British, such as London. But there's just something primal about a good roarin' fire, and others took the opportunity to celebrate as well. At the Happy Vixen in the Purrfection Estates sim a couple nights before on Thursday November 3, a bonfire was set up next to the beach club, with an effigy of "The Guy" going up in smoke, and the people at the party danced away in firey costumes, fire animations, and a few with Guy Fawkes masks or black hats and cloaks.

The music was played by DJ Serenity, with Perri Prinz and Valkyrie Ice sharing the prize for best outfit.

The Happy Vixen's sister club, Club Cutlass would also have a Guy Fawkes party, this one right on the day of the holiday. But no pictures were taken of the event.