Maybe this was the "important development from Linden Lab ...  that will change your Second Lives forever" that was talked about on Monday. 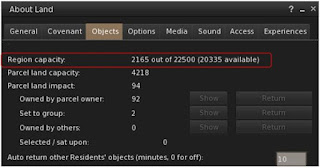 On Tuesday November 1 on the "Deploy Plans of the Week 10-31" thread, someone posted about what he noticed on his sim, "my 1024 sqm parcel there is showing a capacity of 351 PE when it should be only 234. Is there some bonus I don't know about or today's restart just buggered the land for the better?" Others noticed something was going on as well, and one stated, "I asked about the capacity increase on Live chat and the Linden said it is not a bug, that there was a roll to increase the prim useage on Mainland and that there would be a blog post from LL soon." This was followed by a message from Patch Linden.

Hi!  Over the next couple of days there will be some changes coming. The deploy will happen in stages. So as you see these changes rest assured it is normal and is happening as intended.

On November 3, we will post an official blog along with a video where I will have all of the information and details regarding these changes.

Keep an eye on the Official Blog, on Thursday for more info. 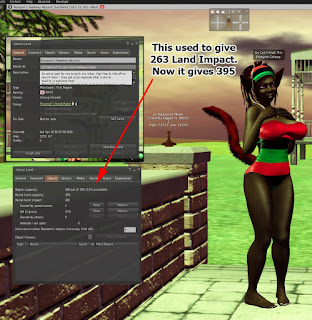 So it looks like there's going to be an increase in how many prims a sim can hold, at least for mainland. Kultivate Magazine claimed that not just mainland, but also private sims, both estates and homesteads, would get a 50% prim capacity increase. The growth would be 22500 prims up from 15000 on full private sims, and 000 prims, up from 3750 on homesteads, "Keep in mind that these prim increases are on some mainland regions, so your sim may not have been upgraded yet."

As of the writing of this article, there is no official word from Linden Lab. But there is plenty of chatter on both the thread of the official forums, and the SL Universe forums. Details will have to wait until the special announcement at 2PM today.