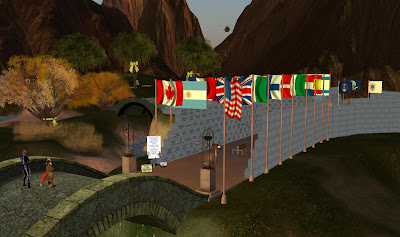 Real life news has been dominated by the results of the US Presidential Election, and reactions to it. But other events go on. Among them the Sixth Annual Second Life Veterans Tribute. Made up of a memorial wall to honor American and other veterans of wars current and past, the Tribute has appeared in some form every year since 2010, built and set up by the Second Life Veteran's Tribute Group. 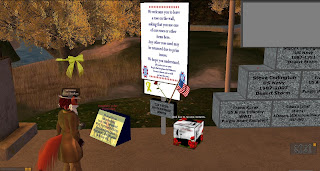 The goal of the Tribute is to provide a non-political, content filled, educational, interactive SIM inside Second Life where men and women of all walks of life can visit and provide remembrance and honor to those who have served in the Armed Services.
The tribute operates on a zero dollar budget and are non-profit; the entire tribute is built, funded, organized and executed on a purely volunteer basis. We have an organized group on SL called the “SL Veteran’s Tribute” if you would like to look it up.  This group will be used as the basis of our planning and scheduling for the Tribute. 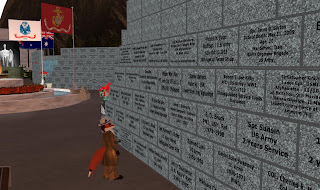 The center and main feature is the memorial wall. Each brick represents a veteran, or sometimes a group of veterans. While a few are still living, most have passed on or were killed in action. Among them is Lohti Aeon/Jacob Burton, whom had a friend in the Sunweaver Estates, and one group of Iraq war veterans whose story was told by a comrade who survived what they were unable to. In the middle is small garden with flags of the US armed forces around it. But US veterans are not the only ones honored, as is evidenced by a small memorial to fallen Canadian soldiers.

While there, I ran into AdamRamsey, whom had been on the team earlier but took a break,  "I remember when that thing first came out. ... Wow, it has grown. This is amazing. I can't believe I took a few years off." He told me he was going to get together with Wildrose Pevensey, one of the team.